We all know by now that the Northwest region of the country was late to the housing bubble. CoreLogic’s latest report shows that NW states such as Idaho, Oregon, and Washington are showing up late to the bust, and we are now leading the way when it comes to declining prices.

“CoreLogic (NYSE: CLGX), a leading provider of information, analytics and business services, today released its Home Price Index (HPI) that showed that home prices in the U.S. remained flat in July as transaction volumes continue to decline. This was the first time in five months that no year-over-year gains were reported. According to the CoreLogic HPI, national home prices, including distressed sales showed no change in July 2010 compared to July 2009.

June 2010 HPI showed a 2.4 percent* year-over-year gain compared to June 2009. 36 states experienced price declines in July, twice the number in May and the highest number since last November when prices nationally were still declining.” 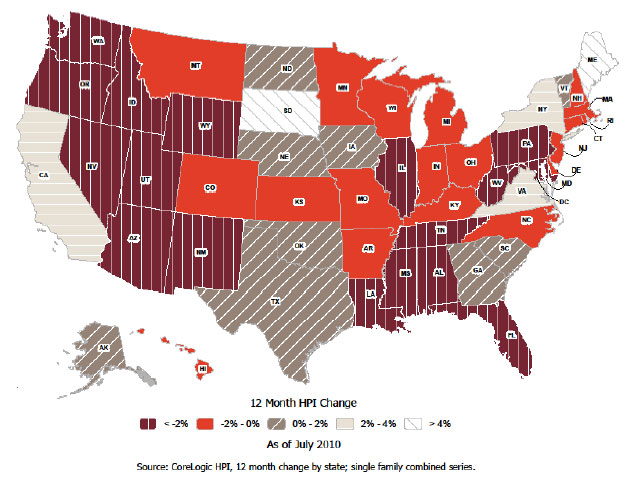 Whether your sale is distressed or you are holding out for bubble era pricing, it’s become obvious that if you are going to sell a property, you’re going to end up settling for an ever lower price the longer you wait to pull the trigger. Plan accordingly if you are trying to sell a home these days in the great Northwest. Sell now or be priced in forever!

If you’re a potential buyer? My best advice is that you keep your powder dry, pay off any existing debts, stop borrowing money, and save as much as you can. Real home prices in OR, WA, ID have nowhere to go but downward as the pool of greater fools has all but evaporated at this juncture. Prudence takes immense patience in today’s real estate game.

The days of EZ bank loans are long gone. All that matters now are savings and real wages when it comes to buying real estate. When the cost of capital funds are cheap, the capital asset appreciates in value. When the cost of capital funds become expensive, the capital asset declines in value. We are in the midst of a generational shift in that equation.

Equity’s a cold hard bitch when it turns negative…

Fewer mortgage borrowers are delinquent on their loan payments, according to the latest data from the Mortgage Bankers Association.
The nation’s overall delinquency rate dropped to 9.85% in the second quarter, down from 10.06% of all loans outstanding three months earlier.

Even better, the percentage of seriously delinquent loans — ones 90+ days late or already repossessed by lenders — dropped to 9.11% from 9.54% in the first quarter.

The drop in loans 90 days or more late was the biggest the MBA has ever recorded, according to the MBA’s chief economist, Jay Brinkmann. “That shows we’re making headway,” he said.

He cited three reasons for the improvement:

•Fewer loans are coming into the default process;
•The homebuyers tax credit, which increased demand for homes, generated many pre-foreclosure sales, removing the attached delinquent loans from the statistics;
•The government- and lender-led mortgage modifications “cured” some payment problems.
However, even with those bright spots, there was one troubling finding: First-time delinquencies increased after four quarters of decline. It inched up to 3.51% in the second quarter from 3.45% in the first quarter. According to Brinkmann, the reversal reflects the weakness in both the housing market and the overall economy.

“It’s a question of jobs,” he said. “It takes a paycheck to make a mortgage payment.”

Underscoring the trend is the foreclosure trend among borrowers with conventional loans, like 30-year, fixed rate mortgages. They accounted for nearly 36% of foreclosure starts during the quarter. And these safe loans rarely get into trouble unless they lose employment or income.

The four worst hit states — California, Florida, Arizona and Nevada — still account for nearly 60% of national delinquencies, but California’s numbers dropped dramatically this year. At the end of 2009, California foreclosure starts made up nearly 20% of the nation’s total. That dropped to 14.7% during the second quarter.

Another positive trend is the gradual downturn in the number of borrowers who are underwater on their mortgages, owing more than their homes are worth.

CoreLogic reported today that the rate of borrowers underwater dropped to 23% in the second quarter from 24% in the first.

When borrowers fall underwater, it increases the chance that they’ll lose the homes. Brinkmann calls it one of the two “triggers” that lead to foreclosure.

If homeowners have positive equity, they can use it as a source of cash to pay bills, including mortgages. But if their cash reserves are gone and they can’t afford to make payments because their income has dropped, foreclosure is almost inevitable.

A new survey shows that Americans are generally taking a dimmer view of homeownership, even as a rising number say they believe it’s a good time to buy a home.

The survey from Fannie Mae reveals lots of interesting insights like this one: homeowners who are underwater, or owe more than their homes are worth, are more likely to view housing as a safe investment than renters. Almost three out of four mortgage borrowers, and nearly seven in ten underwater homeowners, say that housing is safe, compared to just 57% of delinquent borrowers and 54% of renters.

Overall, the number of Americans who say that homeownership is a safe investment has declined—to 67% in July, from 70% in January and 83% in 2003.

While more people believe that it’s a good time to buy and a bad time to sell, the number of Americans who say they’re likely to rent, rather than buy, their next house has increased slightly since January, to one third of those surveyed. (Columnist Brett Arends offers his list of 10 reasons to buy.) Respondents also expect rents to grow much faster than home prices over the next year.

The vast majority of Americans still disapprove of borrowers stopping their mortgage payments. But the number who say it’s acceptable to default if a borrower is underwater has increased slightly, to 10% from 8% in January.

A few other findings from Fannie’s survey (view the full results, in pdf):

A separate survey from the Pew Research Center found that 19% of those polled said it was acceptable to walk away from a mortgage, while 59% said it was unacceptable and 17% said it depended on the situation.

Democrats were twice as likely to say that it was acceptable to walk away from a mortgage (23%) than Republicans (11%), according to the Pew report.